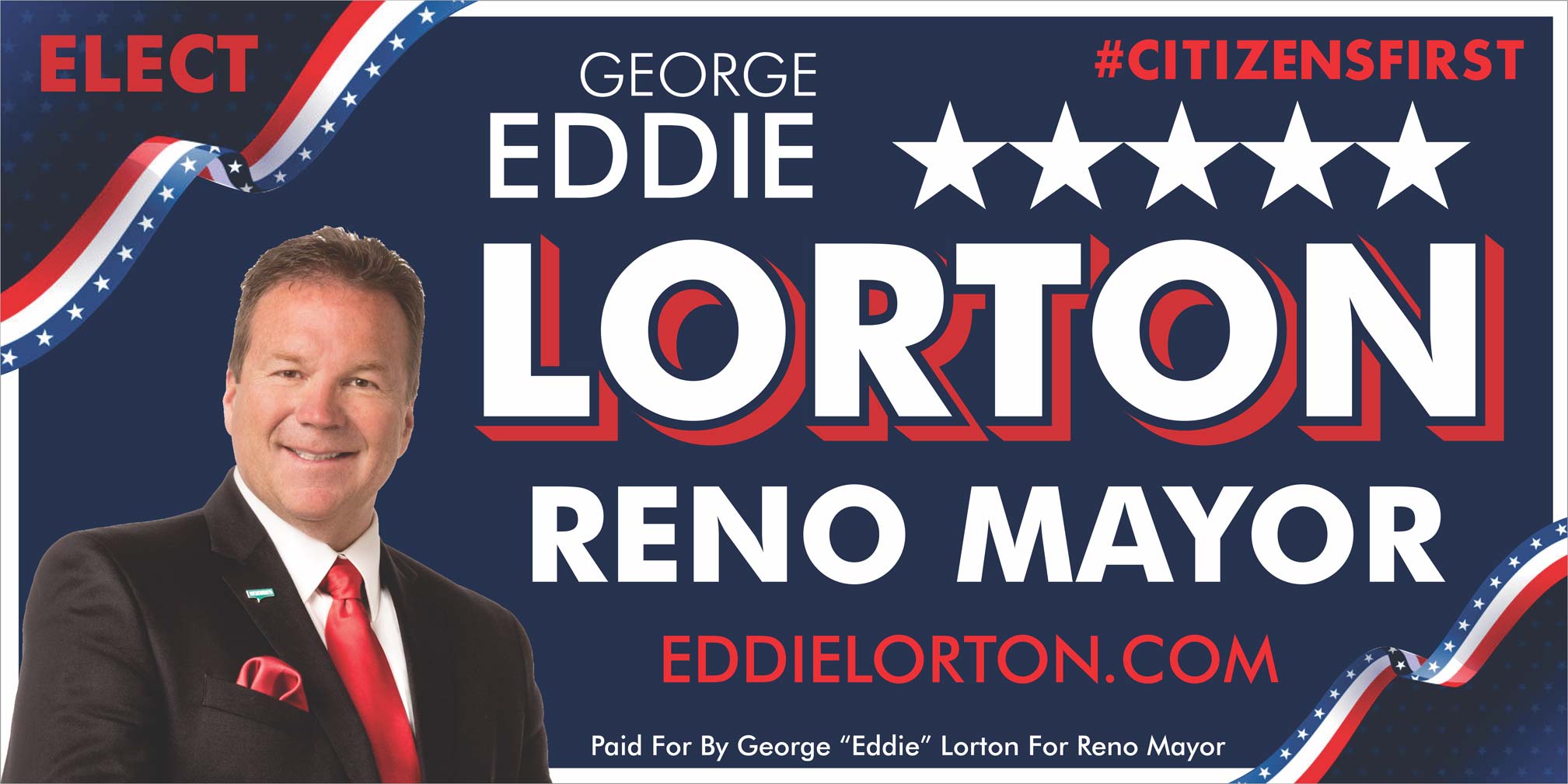 My name is George “Eddie” Lorton and I am asking for a few minutes of your time with this video to allow me to introduce myself to you more personally.

I fight for citizens, not for special interest groups or friends. I’d love for my reputation to earn your vote for Reno Mayor. Thank you for watching. If this video speaks to you, please forward it along to your friends.

Thank you, Reno. It is a pleasure to call this community my home for my 57+ years.

These Are My Beliefs 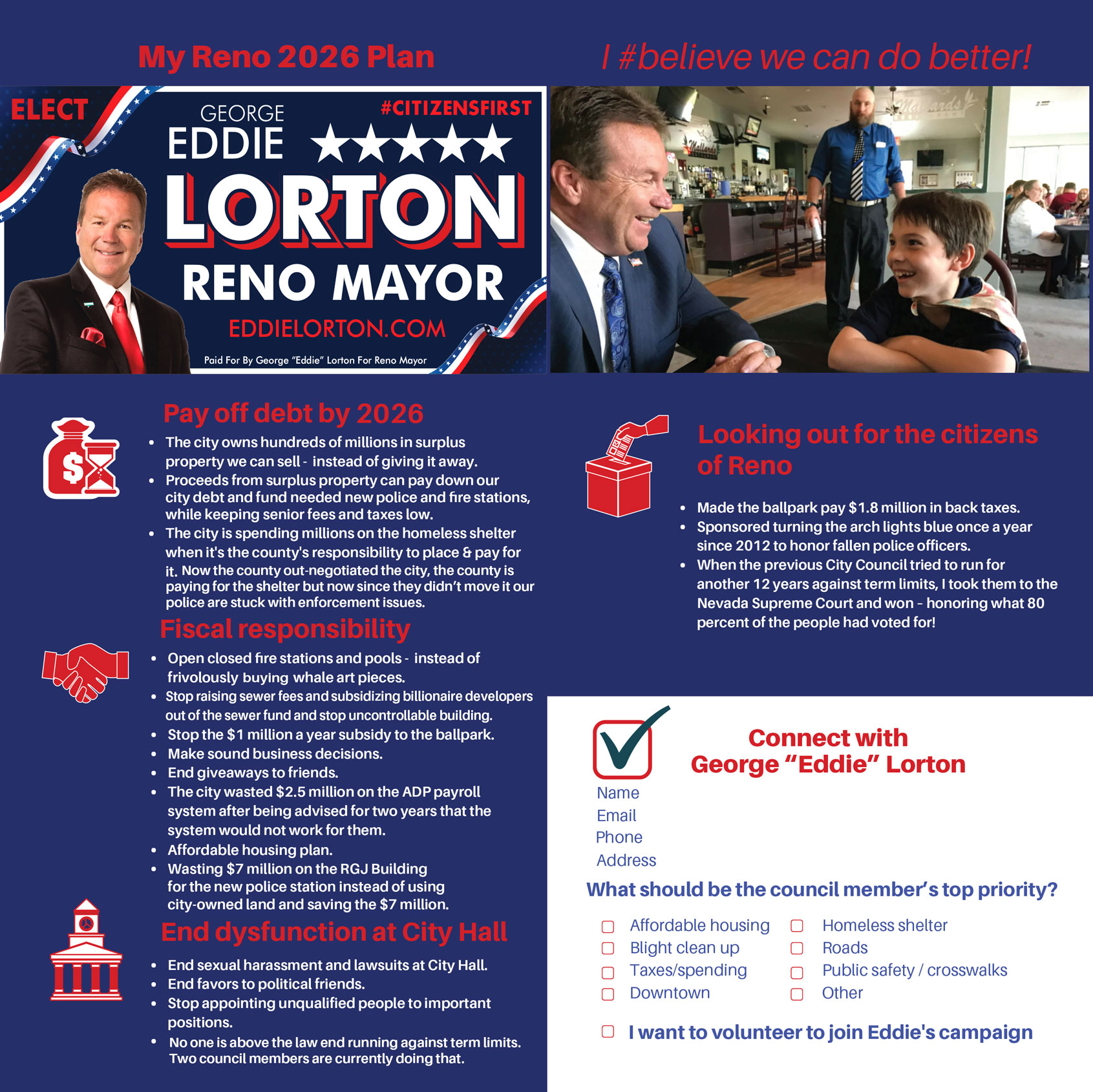 Pay Down Our $1 BILLION Debt

Look After Our Citizens

Do you believe in the future of Reno? If so, get involved! This is your chance to be part of the greatest political movement in Reno history.

This message is only visible to admins.

Error: Error validating access token: The session has been invalidated because the user changed their password or Facebook has changed the session for security reasons.
Type: OAuthException

Great meet and greet fundraiser
last night with Sam Brown
Thank you to everyone for showing up and asking great questions. Together we can take our great city #reno back!

When this happens, it's usually because the owner only shared it with a small group of people, changed who can see it or it's been deleted.
View on Facebook
·Share

What happens when your own mayor sells out their citizens they swore to protect including not properly funding The Reno Police Department turning #reno into the most dangerous city in #nevada ?
#CitizensFirst 👈The Why🇺🇸

💯Let's take Reno back for the people💯

Reno is now the most dangerous city in Nevada. Its violent crime is 45% ABOVE the national average!

#reno time for a new mayor
Vote for #CitizensFirst
eddielorton.com/

It’s like a buffet in Washoe, there is so much to choose from when it comes to shining the sunlight on politicians, policies, etc. Reno was basically built by Nick Abelman, Bill Graham, Jim McKay, a...
View on Facebook
·Share

A lot of people over a lot of years have spent a lot of time crafting a campaign with me, meant to be informative and direct. Thank you to all of you who have supported our efforts!!! To those of you looking for more reasons to trust the campaign for the citizens by the citizens, here are a few discoveries we’ve made by staying diligent in our efforts to keep the public involved in their own process.

One thing I campaign on, is the belief that it is important to know the political landscape in Reno. It is not so much 'democrat vs republican,' as social media tends to paint it, but rather it is 'serving the PUBLIC INTEREST vs serving SELF-INTERESTS.' In fact, many of these, "narrative politics," are meant to distract us from what some politician is doing. For example, if you find a politician uttering the phrase, "election denier," on public record, they are probably doing something selfishly motivated. Once we as citizens recognize the field of play, it becomes easier to identify the corruptions that harm us as a city.

Well, what do we do when we know by identifying evidence that there is corruption and yet, the council body continues to assert to us, "NOTHING TO SEE HERE?!"

First, we display that evidence for the citizenry to see.
Next, we vote them out and elect people who observe, understand, and respect the public.

Recently, Neoma Jardon resigned her position as City Council member for Ward 5 and accepted a position with the Downtown Reno Partnership. Seems like an unlawful action, but I guess the buzz with the "self-interest" crowd is, "well, as long as she's good for the job!” Unfortunately for them, some of us care about what is legal, fair, and right, and that is why we are for serving the “public interest.”

In the wake of Ms. Jardon's resignation, citizens of Ward 5 overwhelmingly stepped forward to ask the council for a special election, which they denied and ultimately voted to appoint a replacement. We must begin to ask these people as members of our community, why do you refuse to let go of self-serving ways?

Now, through a somewhat suspect appointment process, they have narrowed it down to three final potential appointees who will receive (another key phrase to recognize) "THE GIFT OF INCUMBENCY!" It shouldn’t be so easy for me to predict what they are going to do and how, but I’ve said all along this one will be an appointment of their new YES PERSON! We are all aware that voters who aren't familiar with election races tend to favor the incumbent. A special election would have allowed the citizens of the ward to choose outright FOR THEMSELVES.

Nevertheless, we're passed that and its appointment time!
Never mind all the campaign contributions flying back and forth between public officials and ALL THREE of the potential appointees, "NOTHING TO SEE HERE!" Yes, you heard that right. ALL THREE potential appointees gave Hillary Schieve money. She even gave money to some of THEM! Does that sound like serving the public or serving the self?

Thank you to This is Reno for highlighting for us that, wait a second...there actually IS something to see here.
See it here: thisisreno.com/2022/08/ward-5-city-council-finalists-raise-red-flags/

As George “Eddie” Lorton called it so long ago, they are just appointing their YES PEOPLE and they have the appointment process down to an art form. For cryin’ out loud, Kathleen Taylor personally gave Hillary Schieve $1,000. Talk about buying your way in!!

…and while we're at it, maybe the mayor would like to offer a little bit more explanation about Max Haynes? In this article from Our Town Reno, the Mayor seems to give the impression that she doesn't know Max Haynes.

Meanwhile, her campaign and expense reports reveal a bit of a different story. Though telling Our Town Reno that the group hadn't been meeting in a few years, it appears that Max Haynes' company donated a whopping $5,000 to the mayors campaign as recently as May of 2022.

Have you ever given someone you don’t know $5,000? What’s the mayor hidin…? …You know what, it doesn’t matter. We just vote her out this time. Time to break up the toxic ring. Local city councils shouldn’t have dynasties while blatantly disregarding term limit laws.

While we're talking about the mayor and her contacts, I'd like to pose a question for CITIZEN DEBATE!

QUESTION:
IS THIS AN ACCEPTABLE FAVOR FROM A PUBLIC OFFICIAL TO PRIVATE CITIZENS AND WHY?

CONTEXT:
The mayor has swung a favor for her friends at JUNKEE to receive huge benefits from the city operated NATIONAL BOWLING STADIUM. (Which the public can't even use.)
These friends will host a haunted house that will rake in six or seven figures, meanwhile not paying for the facility which is city owned and would be city revenue.

Lastly, speaking of debates, not sure if there's going to be one. Once again, citizens need and deserve a fair and equal debate and the mayor won’t agree to debate unless she gets the loaded dice. Thanks to Mark Robison for attempting to set up an impartial debate with KOLO before Hillary Schieve began to stack the deck in her own favor.
We'll keep you updated on the Reno Mayoral Debate 2022. We’ve got ideas and solutions as always!

The selection of three finalists for the vacant Ward 5 Reno City Council seat is revealing some of the ties that bind sitting council members to the candidates.
View on Facebook
·Share